Stabroek Market, a focal point in downtown Georgetown was built on approximately 7,135 square metres (76,800 square feet) of land. The market, which was built both on land and land reclaimed from the Demerara River, was completed and declared opened on November 1, 1881.

The structure is the second building, but third market to be situated on the site. The first market started considerably small when a group of enslaved persons were given permission by the Court of Policy in 1792 to sell their produce in an open area on the plot of land. This practice was continued after slavery was abolished; however, it was regarded as a meeting place more than a market. The first building was built in 1842, and this building became known as Stabroek Market. The market soon became small and suggestions were made to have a bigger market built.

In 1879, a committee was formed to examine and approve plans submitted by various companies. An American engineer, Nathaniel McKay’s design for the market was selected. The corner stone for the second structure was laid on July 17, 1880, by Mrs. Kortwright, wife of Governor Cornelius Kortwright.

The building is essentially a steel framed structure, which caused some amount of conflict locally since the use of steel as a primary building material was not practiced. However, the market was designed to resist or retard the spread of fire in the building.

One prominent feature of the market is its four-faced public clock. The clock is placed 18 metres (60 feet) above the ground in the tower of the market. Three of the clock faces are aligned to face Croal and Water (facing both north and south) Streets respectively and the fourth faces the Demerara River, providing the time to the ships and vessels that were docked at the market’s western façade. 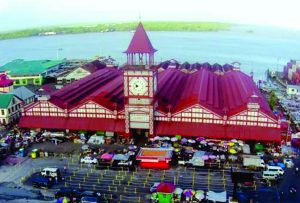