Christianburg, located on the west bank of the Demerara River is Linden’s first settlement, and was known as Stabroek in the 19th century. Originally a Dutch settlement, the inhabitants were mostly involved in balata and rubber bleeding and later the planting of sugarcane. Stabroek was renamed Christianburg in honour of Governor Christian Finette who joined his first name with his wife’s family name ‘Burg’. After the English invasion in 1803, Scottish Engineer Mr. John Dalgleish Patterson was contracted to construct living quarters for Government officials. Patterson remained on the plantation after the living quarters were completed. He later harvested sugarcane and operated a saw milling business.

The Christianburg Waterwheel located on Burnham Drive, Christianburg, Linden, was installed as part of a hydro-powered sawmill on the plantation sometime during the latter half of the 1800s. This hydro-powered sawmill was needed to improve the production of logs and reducing the cost associated with it. The waterwheel is regarded as one of the earliest engineering structures to be built in the town.

Prior to the construction of the sawmill, logs were tied together, strung alongside a punt and floated downstream. Katabuli Creek area was identified for the sawmill’s construction since the flow of water through the creek from the savannahs into the Demerara River was strong to permit construction and feasible production of timber.

The Christianburg Waterwheel was built by Mirrlees, Tait, & Watson, Glasgow, and the company’s name is embossed and can be seen numerous places along the waterwheel. This company started as an engineering partnership to manufacture sugar cane processing machinery in 1840. It was known then as P and W McOnie. Over the years, partnerships with other individuals caused changes in the company’s name; in 1858 it became Mirrlees & Tait, and in 1868 it was renamed Mirrlees, Tait, & Watson. The hydro-powered sawmill ceased operations in the 1950s, however, the waterwheel still remains a tangible reminder of Linden’s industrial heritage. 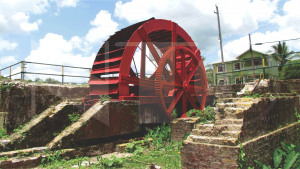